Ego can detour you from your life journey: Part 1

Ego can detour you from your life journey: Part 1

Our ego can expertly derail us from our spiritual path, but more alarming is that it can do this without us consciously being aware of it.

Ego feeds us misinformation such as we aren’t good enough, we’re better than others or we shouldn’t to listen to our intuition. When we heed that inner negative voice, we block our ability to fully open to heavenly guidance.

Eckhart Tolle, a spiritual teacher and best-selling author, describes ego this way: “Ego is any image you have of yourself that gives you a sense of identity—and that identity derives from the things you tell yourself and the things other people have been saying about you that you’ve decided to accept as truth.”

He continued to say that ego is a “protective shell that works like armor to cut you off from other people and the outside world. What I mean by shell is a sense of separation: Here’s me and there’s the rest of the universe and other people. The ego likes to emphasize the ‘otherness’ of others.”

Through experience, I’ve discovered that ego not only separates us from others, but from God as well. It erects a barrier to keep us from growing and makes us believe we are in control because we’ve fortressed ourselves in a little world of our making.

I’ve worked to lessen the ego’s power in my life so I can more easily follow divine guidance. However, I’ve discovered it finds ingenious ways to maintain dominance. 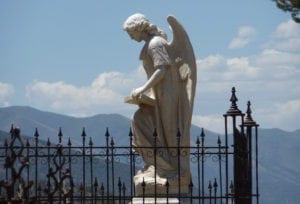 After my miraculous healing in 2007, I experienced several other major health issues, some requiring surgery. It seemed each time I’d grow my spirituality and intuition, debilitating illness struck.

Recently, while meditating, I received the message that the newest looming health threat was an illusion and that I wasn’t to make it real by granting it power through my fearful thoughts.

As someone who was very ill for 18 years, I held a deep-seated fear of going back to being bed-ridden. Each time I suffered a setback, I’d wonder why God had healed me from such a nasty illness only to make me sick with various ailments again and again.

But it wasn’t the Universal Power inflicting disease. It was me because I never confronted my horror of disability. Instead I’d harbored that terror, letting it rise to the surface every time any symptom appeared. I’d obsess about the worst possible scenario. (I don’t believe we’re normally responsible for creating disease—only when patterns occur, should we consider our fears and thoughts as a self-fulfilling prophecy.)

What you focus your energy on is what you’ll attract. When you obsess about your fear, you’re contributing to its reality.

When a pattern arises, one that repeatedly prevents you from moving forward, ask yourself, “Am I inviting disease (or something else that terrifies you) into my life? Is my ego or my lack of self-esteem looking for a legitimate reason to fail?”

What are you most terrified of? Admit it. Pray about it. Ask the Great I Am to erase your worries and ask for the Archangel Michael to protect you from returning to your old, stifling thoughts.

See next week’s continuation on this subject that covers how ego tricks you into thinking it’s furthering your spirituality.

Empower what’s good in your life