Watching scary movies like “The Amityville Horror” and “Annabelle” get our hearts racing in a fun way. But for Chris McKinnell, helping others rid themselves of negative supernatural energies is his daily reality.

Chris, who began working with his grandparents Ed and Lorraine Warren as a teen, continues their work as the director of the Warren Legacy Foundation for Paranormal Research (WLF). The foundation researches thousands of cases worldwide and assists those tormented by negative energies.

His grandparents played key roles in some of the world’s most notorious investigations in Amityville, Enfield and the hauntings that inspired “The Conjuring” movie series. Their former home, now owned by a family member, still houses their private basement museum, which includes the Raggedy Ann Doll Annabelle, safely locked away in a glass case. 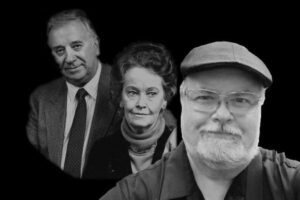 At 16, Chris attended his first paranormal investigation with his grandfather. He witnessed two negative entities walk around, watched a levitation and saw crosses turning upside down. Also, he heard growling and pounding that shook the walls.

Most people would be scared away after encountering an event such as this. But not Chris. Instead, he continued to learn from his grandparents. He witnessed his first exorcism in 1985 for Massachusetts farmer Maurice Theriault. Documented in the book “Satan’s Harvest” and in a 1995 Union-News article, both sources stated that tables rose off the floor and Maurice’s skin erupted in boils and crosses. Catholic Bishop Robert McKenna performed the exorcism.

For Chris, the gravity of the situation was made clear: his grandfather had a heart attack during the rite. “I learned quickly this was a deadly profession,” Chris said about that case.

The biggest myth about spirit possession

True possession is rare. Chris estimates that one-tenth of one percent of the 1,000 plus cases the foundation investigates annually turns out to be possession. “I have personally worked on 7 possession cases in the past seven years,” he said.

When contacted by a person needing assistance, foundation professionals first engage a psychologist to evaluate the person experiencing the issue. They also contact family members for background. Almost every case is found to be rooted in mental illness, trauma, angst or someone who is haunted by a harmless spirit.

“Most often people fear what they don’t understand,” Chris said. “Just because you encounter a spirit, it doesn’t mean it is dangerous. Spirits are always around us; they are a part of our world. Is it trying to hurt you or get your attention? An example would be us finding out it isn’t the devil. Instead, it’s your Aunt Mary coming by to make sure you are okay.”

When the supernatural causes harm, one area the foundation addresses is whether this is a case of oppression or possession. Oppression is when a person still has freewill, but they allow the spirit to influence their behavior. The danger here, according to Chris, is that the entity is moving and shaping that person into what it wants.

Possession is the spirit’s final step in taking absolute control over the person.

Who is vulnerable to spirit attacks?

Here are some common issues:

Essentially those bogged down in a negative headspace are more attractive to harmful energies that seek to inhabit a body. “You can never take psychology out of the paranormal ever. We’ve found that by getting rid of the underlying issue, we may not need to proceed to the exorcism,” he said.

A major factor in whether an exorcism will be successful is the possessed person’s faith in something greater than themselves. The WLF works with all major religions and brings in an exorcist that matches the victim’s belief system.

But what if the possessed person doesn’t believe in a higher power? Chris said, that the victim must trust the exorcist’s skills and be able to “get out of their ego.” He added that it’s very difficult to remove an entity from a person if they don’t believe in the power of the ritual.

Chris’ grandfather said the exorcist’s faith must be unwavering as well. In the Union-News article, Ed Warren said, “You have to have faith in your work, and you have to have a great deal of faith in God because that is your only protection against the forces you’re coming up against.”

Started by Chris McKinnell and Lorraine Warren, the WLF not only assists those experiencing difficulties with the paranormal, but also strives to further psychical research and educate ghost investigators. WLF never charges a fee for its services or exposes its clients to publicity.

As the foundation’s work increases, its need for volunteers grows. “We are constantly refining ourselves to better serve our clients,” Chris said. They welcome people of all backgrounds to give their time and expertise in many areas including: paranormal investigations, information technology, human resources, marketing and other areas all organizations need to thrive.

Visit WLF for more details, to ask for help, volunteer or join the organization.