When I was 20, I planned my entire life. I’d marry at 25, have my first child at 27 and my second at 29. Later, I’d own a successful public relations firm and easily juggle my blissful marriage and kind children.

And that’s how it turned out. NOT!

Instead, my life veered in directions I could never have imagined: a devastating illness that lasted 18 years and an overnight encounter with ghosts that shattered my reality and led me—a very private person—to bare my spiritual and paranormal beliefs to the world.

I’m thankful that I didn’t know what my future held as it would have been hell to know the pain and misery I was to endure with that chronic disease. And, my evangelical, logical 20-something self wouldn’t have approved of my certainty in the existence of ghosts and my interactions with them.

For each amazing S curve I’ve been put on, I’ve always had what was necessary to survive the ordeal. God had prepared me in ways I couldn’t foresee and placed people in my life who knew what I needed to get past those seemingly insurmountable obstacles. 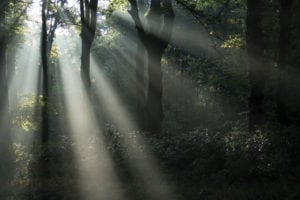 The other day I read Hebrews 11:8, “By faith Abraham, when called to go to a place he would later receive his inheritance, obeyed and went, even though he didn’t know where he was going.”

Yes, the Bible refers to an actual physical location, but when I came across it, it hit me that faith means listening to God’s prompts and following them, even when we don’t know where they’ll take us.

Having faith means you have no idea where the Great I Am will take you, but if you trust God, you’ll achieve your purpose in life.